Chinese first lady Peng Liyuan is expected to stroll inside the Forbidden City on Friday with her US counterpart, Michelle Obama, whose upcoming trip will spark new interest in Chinese culture among Americans and further advance people-to-people exchanges between the two countries, observers said.

On Thursday, the US first lady will kick off her visit to Beijing, Xi'an and Chengdu with her daughters, Malia and Sasha, and her mother Marian Robinson. 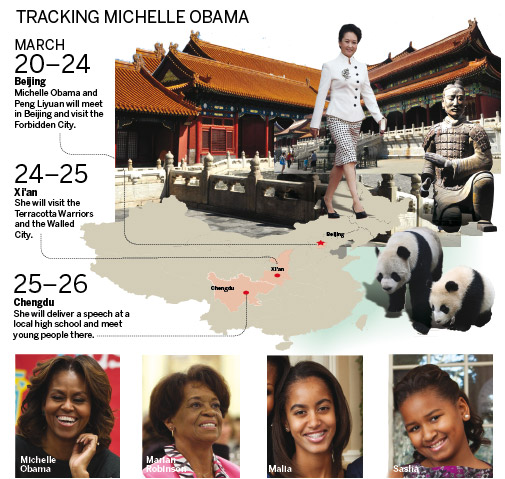 Peng will also accompany the Obamas on a visit to a high school and attend a private dinner and performance in Beijing.

Peng visited the US last June with her husband, President Xi Jinping, and attended meetings with US President Barack Obama in Sunnylands, California. However, the two first ladies did not meet.

"Both first ladies are sending their goodwill as Peng is ready to display Chinese culture and hospitality to Michelle Obama, while Mrs Obama and her daughters have shown interest in Chinese language and Chinese food," said Ni Feng, a researcher at the Chinese Academy of Social Sciences.

"Their interactions diversify the forms of leadership contacts between Beijing and Washington, which is pivotal to stable bilateral ties and the resolution of disagreements," Ni said.

Michelle Obama will speak at Peking University and meet with Chinese and US students who have studied in each other's countries.

China is the largest source of foreign students to US universities with more than 200,000 students studying in the US. In 2009, Obama announced the 100,000 Strong Initiative to encourage more US students to pursue studies in China.

Describing the activities as sending a strong message on the importance of education, Tina Tchen, chief of staff to the US first lady, said Mrs Obama is very much looking forward to interacting with Peng.

Ni said communication between the first ladies on topics such as youth, education and culture helps improve understanding of the two societies.

Along the way, the US entourage will visit the Great Wall in Beijing, the Terracotta Warriors and the Walled City in Xi'an, an ancient capital in northwestern China. The family will also visit a panda reserve in Chengdu, Sichuan province.

The White House is encouraging students at US schools to follow Michelle Obama's trip to China online via the White House blog, Twitter or through PBS LearningMedia and Discovery Education.

"Her visit and her agenda send a message that the relationship between the United States and China is not just between leaders; it's a relationship between peoples," said Ben Rhodes, the White House deputy national security adviser for strategic communications, on Monday.

"Her focus on people-to-people relations, her focus on education and youth empowerment is one that we believe will resonate in China," Rhodes said, adding that the trip will improve relationships.

Analysts said the visit will emphasize issues that Washington and Beijing have in common, like education and family.

"Hopefully, it will help to slow or reverse the current trend, which is toward more negative opinions about each other, seen evidently in recent polls," said Bonnie Glaser, senior adviser for Asia at the Center for Strategic and International Studies.

Orville Schell, director of the Center on US-China Relations at the New York-based Asia Society, said Michelle Obama's trip offers a symbolic expression of a genuine US commitment to do everything it can to achieve new breakthroughs in relations with China.

Xi slated to sign flurry of deals in Europe

Li vows not to give up plane hunt