For an adventurous traveler like Chen Yu, deciding where to go on holiday used to involve hours of scouring guidebooks for tips on attractions, decent hotels and how to get around in a foreign land.

"Now all I need is my smartphone," says the 35-year-old from Beijing. 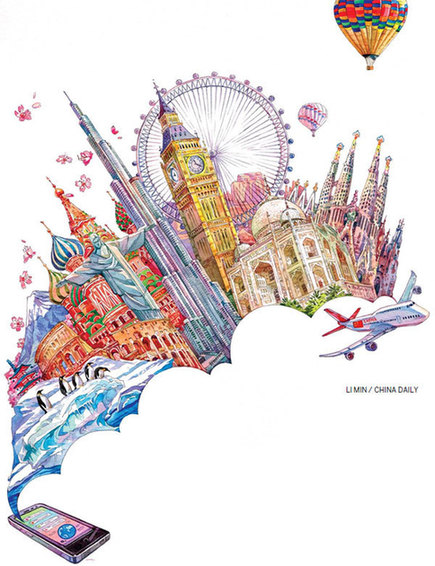 Avid travelers have been among the biggest beneficiaries of this technological revolution - they can now book flights and hotels in an instant, use "digital wallets" to buy souvenirs, post reviews on the fly, and download apps that offer detailed maps and guides of far-flung places, all in their native language.

"An app can lead me straight to a place serving authentic food, a popular show or to an experience that gives me the taste of the local life," Chen says.

The development in mobile Internet has undoubtedly contributed to the boom in China's outbound tourism, which led to the country becoming the world's biggest source of tourists in 2012.

According to official data, Chinese tourists were expected to make 120 million trips abroad in 2015. That would be an increase of 16 percent year-on-year and roughly 12 times the figure recorded at the turn of the century.

Bank of America Merrill Lynch has estimated the number could hit about 174 million by 2019, with tourist spending increasing to $264 billion (244 billion euros).

"Technological advances have been key, as the Internet has reduced travel costs and made exotic destinations more viable (for Chinese tourists)," says Zhu Zhengyu, an analyst at Analysys International. "It has also led to more Chinese traveling independently rather than in groups."