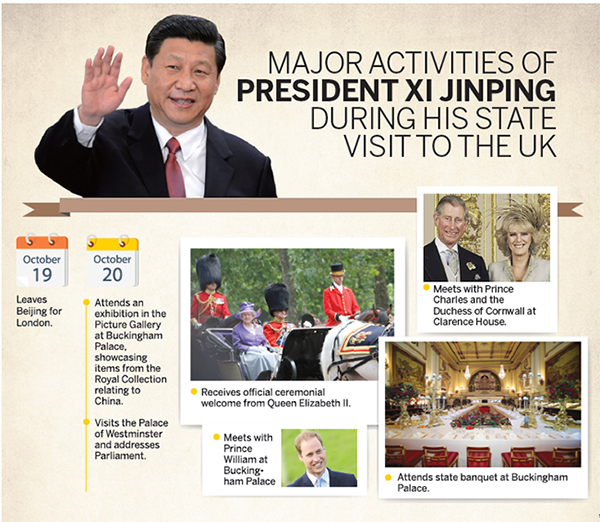 China and UK poised to sign agreements worth billions of pounds

President Xi Jinping says his state visit to the United Kingdom this week will chart the course for future bilateral ties.

The Chinese leader has also praised Britain's "visionary and strategic choice" to become China's best friend in the West.

Xi, who made the remarks in a written interview with Reuters on the eve of his departure for the UK on Monday, will lead a 150-member business delegation, with billions of pounds of investment planned.

The visit, the first to the UK by a Chinese head of state in a decade and Xi's first to the country in more than 20 years, has been hailed by British and Chinese officials as the start of "a golden era" of relations.

London has been preparing for the visit since last year, and the UK took a lead in joining the Beijing-initiated Asian Infrastructure Development Bank last winter.

The UK has also said that it will be the Western country that is most open to China.

"This is a visionary and strategic choice that fully meets Britain's own long-term interest," Xi said.

During the four-day trip, which begins officially on Tuesday, Xi and first lady Peng Liyuan are scheduled to take part in more than 30 events with members of the British royal family and high-ranking government officials.

Besides addressing Parliament, Xi, who is a soccer fan, will also visit Manchester City, the English Premier League leaders.