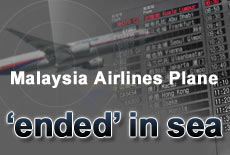 Chinese and Australian ships hunting for a missing Malaysia Airlines jetliner have picked up separate acoustic signals in different parts of a vast Indian Ocean search area and are trying to verify if one could be from the plane's black box recorders.

Chinese patrol vessel, the Haixun 01, had picked up a fleeting "ping" signal twice in recent days in waters west of Perth, near where investigators believe Malaysia Airlines Flight MH370 went down on March 8.

More planes and ships were being sent to assist in that area, but meanwhile, Australia's HMAS Ocean Shield had reported a separate "acoustic event" some 300 nautical miles away.

"HMS Echo and Australian Defence Vessel Ocean Shield are also being directed to join Haixun 01 as expeditiously as possible to assist with either discounting or confirming the detecting," Retired Air Chief Marshal Angus Houston, head of the Australian agency coordinating the operation, told a media conference in Perth.

Huston also said China has been sharing everying in the multinational search.

Chinese patrol ship Haixun 01 detected on Saturday a pulse signal with a frequency of 37.5kHz per second in southern Indian Ocean waters, which still couldn't be verified to come from the missing plane.

The black box detector deployed by the Haixun 01 picked up the signal at around 25 degrees south latitude and 101 degrees east longtitude.

Also on Saturday, a Chinese air force plane spotted a number of white floating objects in the search area, which was approximately 216,000 square kilometers, about 2,000 kilometers northwest of Perth.

Australian search authorities said such a signal would be consistent with a black box, but there was no conclusive evidence linking it to the Boeing 777.

Southern area back in focus

Houston said analysis of earlier satellite data had again led investigators to refine the search area towards the southern part of the corridor.

"The area of the highest probability is, what we think, the southern part where Haixun 01 is operating. That is why we are really interested in the two acoustic encounters that Haixun 01 has had."

Australian Prime Minister Tony Abbott said he was "hopeful but by no means certain" that the reported pulse signals were related to MH370.

"This is the most difficult search in human history. We are searching for an aircraft which is at the bottom of a very deep ocean and it is a very, very wide search area," Abbott told reporters in Tokyo, where he is on a visit.

Up to a dozen planes and 13 ships will be scouring three separate areas about 2,000 km (1,240 miles) northwest of Perth, Australia's Joint Agency Coordination Centre said on Sunday.

Challenges in search for MH370 'unprecedented'