In the 15 minutes or so that it took Taiwan singer Jolin Tsai to sing three songs, sales of the brand she endorses surged on the online platform Tmall.

With Alibaba, JD.com well and truly cashed in on the Singles Day euphoria, beating its sales record of last year before midday. It says that it received 32 million orders during the day, 130 percent more than last year. It did not disclose its sales figures.

About 70 percent of Alibaba's and JD.com's orders were placed through mobile channels such as smartphones and tablets.

Zhang of Alibaba says his company had foreseen that a huge number of shoppers would place orders using mobile devices.

"So we have put a lot into making shopping easy for people. We've found that a rapidly growing number of visits to our website are made in peak travel hours when people are heading to work."

By analyzing the locations of mobile phone users when they make their purchases, Alibaba recommends different kinds of items to shoppers, which Zhang says was also an important reason for the success of Nov 11.

"China is a big country. In North China it is winter, but in the south people are still wearing T-shirts. By offering different items to different people based on their location and their shopping history we can increase sales."

Nicholas Kontopoulos, global head of fast-growth markets and marketing innovation at SAP Hybris, says that as income levels and Internet penetration continue to grow throughout China and technology continues to develop, e-commerce can only flourish. 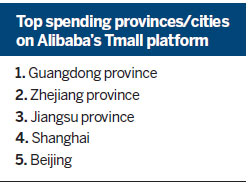 "The amazing sales figures reflect people overextending themselves in their spending. Many online shoppers will use the 24 hours to buy stuff they have needed for months, and once Nov 11 has passed, sales figures will drop."

It is immaterial whether or not e-commerce players have high sales figures on Nov 11, she says.

"The most important thing is whether or not vendors can make money from it. I reckon a lot don't because of the cutthroat discounts they offer."

Even as the media have waxed lyrical about Nov 11 and the bumper record sales figures that seem to have become routine each year, the thousands of shopping malls and department stores throughout China have been placed under increasing pressure.

On Nov 4, Commerce Ministry spokesman Shen Danyang said online shopping was an ever increasing danger to retailers, and some stores were being forced to close or cancel property leases.