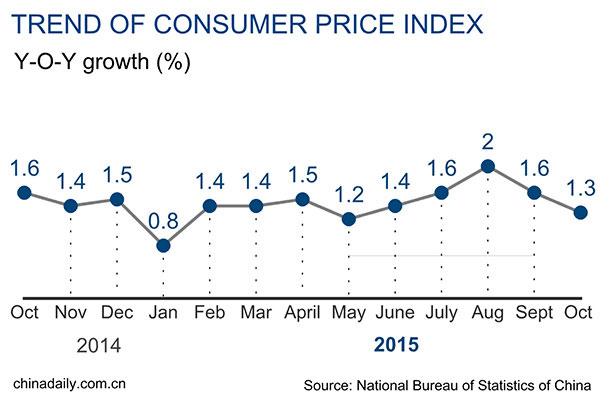 The October consumer price index (CPI) rose 1.3 percent from a year earlier, compared with 1.6 percent in September, National Bureau of Statistics (NBS) data showed on Tuesday. The reading came in below expectations of a 1.5 percent rise according to a Reuters poll of economists.

The producer price index (PPI) fell 5.9 percent in October from a year earlier, equal to the 5.9 percent decline in September and slightly worse than economists' forecasts of a 5.8 percent drop.

China is already in its biggest easing cycle since the height of the financial crisis, but low inflation means that real interest rates remain high for many firms, especially manufacturers many of whom have already endured several years of falling factory gate prices.

More stimulus is needed to secure Beijing's growth target of no less than 6.5 percent in the next five years, and pave the way for a the transition to more a consumption-led growth model, analysts say.

Trade figures disappointed analyst expectations by a wide margin in October with exports falling 6.9 percent and imports slipping 18.8 percent. Activities in China's factory sector fell for the eight months in October, private and official survey showed, though the reading pointed to a slower pace of contraction.

'No chance of settlement' between Alibaba and Kering