Two Seasons to be cheerful

China's culture on show in UK during exchange year

Entitled Creative China, the Chinese season of the China-UK Year of Cultural Exchange - from July to December - has been rolling out a variety of events.

"This is the first China-UK Year of Cultural Exchange," says Xiang Xiaowei, cultural counselor at the Chinese embassy in the UK. The two countries agreed to designate 2015 as a year of cultural exchange during Premier Li Keqiang's visit to the UK in June 2014, with the first half being the UK Season in China and the second half being the China Season in the UK.

"The China Cultural Season aims to bring Chinese and British artists, art and cultural organizations, creative businesses and organizations together, and build a bridge for more substantial and sustainable cooperation between the two countries," Xiang says.

"China and the UK are both influential countries that have a splendid history and culture. Both are proud of their cultural traditions, yet both are keen on innovation and creativity," Xiang says.

One element of the China Season in the UK was the Amazing China: 2015 Mobile Phone Photo Contest, which encouraged tourists around the world to discover the beauty of China by sending in photos for prizes.

The contest launched on Aug 10 and concluded on Oct 7, and attracted more than 8,000 entries from the world. Now 100 of the best photos will be displayed on London's famous taxicabs. The taxis will display the photographs for one month, starting Oct 18.

"Photos are an ideal way to express feelings and tell stories," says Kang Bing, deputy editor-in-chief of China Daily and chairman of the contest organizing committee.

The contest had six categories: landscape, architecture, human interest, food, family and on the road.

China Daily and Britain's Royal Photographic Society are supporting the competition. It also has the backing of the cultural sections of the Chinese embassy in Britain and Chinalink London. Chinese auto manufacturing company Geely is the contest's lead sponsor. Geely also owns the London Taxi Company, which makes the distinctive vehicles.

Design Shanghai brought the best of Chinese design to the UK with a September exhibition at London's Olympia arena.

The forum was designed to encourage and facilitate continuing exchanges and potential collaboration in the fashion industry between China and the UK, such as the common development of urban fashion and creativity in China.

"We are delighted to see the forum is able to provide the audience with a greater understanding of the fashion and creative scene in the city of Shanghai and China", says Lyu Xiaolei, deputy secretary-general of the Shanghai Fashion Week Organizing Committee.

Shanghai Fashion Week signed an agreement with the British Fashion Council, promoting further exchanges and collaborations between the fashion weeks of London and Shanghai.

In August, the PLA Military Band performed at the long-established Royal Edinburgh Military Tattoo. The band is acknowledged as China's leading ceremonial military band with a repertoire of more than 2,000 works. 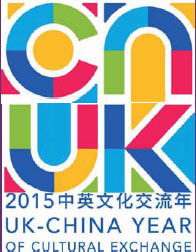 David Allfrey, chief executive and producer of the Royal Edinburgh Military Tattoo, stresses the importance of the China Cultural Season. "I think we have so much to learn from each other." The Tattoo first took place in 1950, with representatives from armed forces around the world parading on the ramparts of Edinburgh Castle, which overlooks the Scottish city.

In July, Shakespeare's Globe Theatre, on London's South Bank, embraced the Chinese-language version of Richard III. The National Theater of China adapted Shakespeare's historical play, which is famous for its Machiavellian lead and quotable verses about horses and winters of discontent.

Catherine Mallyon, executive director of the Royal Shakespeare Company, says the company is planning to translate Chinese classics into English as part of the cultural exchange.

Other Chinese Season highlights include the Shenzhen-Edinburgh International Creative Industry Incubation Centre, launched in Edinburgh, and the China-UK Design Forum at the Victoria and Albert Museum.

Keith Nichol, coordinator of cultural diplomacy at the UK's Department for Culture, Media and Sport, says the creativity of the China Season demonstrated the fast growth of China's creative industry.

In March Prince William, Duke of Cambridge, visited China and officially launched the UK Cultural Season by painting the eye of a Shaun the Sheep model.

Rachel Ireland, regional head of Asia from the British Council, says the UK Season held in China in the first half of this year had found a passionate audience among Chinese people.

"The China-UK Year of Cultural Exchange opens up windows for people in the two countries to share the best of their cultural fruits, and to enjoy the mutual learning and in-depth development of China-UK relations," Xiang says.