When the little British piggy went to market, there is a fair chance it ended up in China.

China has become the second-biggest market outside the European Union for UK food exports, after the United States, growing by 11 percent in 2014 to 218 million pounds ($332 million; 292 euros), says the latest full-year report from the UK's Food and Drink Federation.

"We believe the British reputation for high standards of food safety, provenance of ingredients and product quality underpins the success we have experienced in the Chinese food and drink market," says Steve Barnes, economics and commercial services director of the federation.

Barnes says exports to China are benefiting from significant trade deals struck in recent years. The main foods exported to China are British pork and Scottish salmon, according to the federation.

In 2011 China shifted salmon sourcing to Scotland. British pork has been imported by China since 2011, with an additional pork export deal agreed by the UK agriculture minister during a trade mission in 2012.

Last year, for the first time, salmon became the UK's biggest food export to China, continuing its growth from virtually nothing in 2011 to being worth almost 65 million pounds, with an extra 40 percent in volume last year, says the Scottish Salmon Producers' Organization.

Loch Fyne is one of the Scottish companies keen to export salmon to China.

"We strongly believe that there is a market in China for high-quality products, and Scottish salmon offers the best quality and flavor that will be appreciated by those looking for a premium product," says Simon Briggs, sales director of the company. He says building direct contacts with the Chinese is the best way to win business.

"We have hosted inbound visits to Loch Fyne from China and believe very much in working in partnership with our customers, inviting them to visit Loch Fyne, to understand our location, working practices and the passion we put into creating our product. Our partners are carefully selected with a view to enjoying a long-term working relationship," Briggs says. 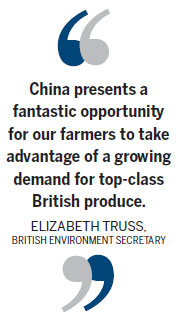 The pork industry was given a significant boost after the UK increased the pork trade with China in 2012, with 30 million pounds in value being shipped each year.

Annual exports of UK pork around the world now amount to 214 million pounds, up from 149 million pounds in 2010, and China is by far the biggest international customer, with a growing appetite for British produce, says a report from the UK Department for Environment, Food and Rural Affairs.

"UK food has an excellent reputation the world over, and China presents a fantastic opportunity for our farmers to take advantage of a growing demand for top-class British produce," says Environment Secretary Elizabeth Truss. "I have been impressed by the way the pork industry has embraced this new market.

"I want to do all we can to increase access to growing markets like China. China is now one of the UK's fastest-growing export markets."

The 218 million pounds of British produce exported in 2014 was more than double the 2010 figure, she says.

Truss visited China in January to discuss opening up the market further for British exports and expanding the number of UK plants that can export pork to China.

There is demand in China for UK pig trotters and ears, whereas the UK market for those products is relatively small.

There is also a growing interest in dairy products, and UK exports of processed milk and cream to China grew at an annual rate of more than 1,000 percent in 2013 to 6 million pounds in value.

According to a report on industry website DairyCo, Chinese consumers are concerned about the quality of dairy products, which is thought to be driving strong growth in China's liquid milk market.

The report shows that imports of liquid milk by China grew 78 percent year-on-year in 2014, reaching nearly a third of milk powder import volumes.

Liquid imports from the UK grew more than eightfold, making the UK the ninth largest supplier of liquid milk to China.

Some branded Northern Irish dairy products seem to have gained the confidence of Chinese shoppers. Industry experts believe that Northern Ireland's favorable natural conditions as well as its high standards of food security have boosted its dairy products' popularity with consumers, especially those in China.

Professor Chris Elliott, director at the Institute for Global Food Security, Queen's University Belfast, says: "When you look at milk production in Northern Ireland, it is very different from most parts of the world. Our cows graze on extensive open pastures, feeding on the lush grass that our fertile soils and climate help nourish.

"We have a very long tradition of thinking about the welfare of animals and making sure that everything we produce is of the highest possible standards in terms of safety and quality."

Elliot says that in 2010, the government in Northern Ireland set out to develop the world's safest supply chain for animal feed materials, called the "Food Fortress" system, which it called the most broad-ranging feed quality assurance scheme in the world.

One company there that has benefited from such measures is Lakeland Dairies, which has trading partners in more than 70 countries.

"China and the wider Asia region have been identified as an area of high growth potential and we have committed to employing commercial and technical people based in the markets to find and satisfy new customers," says Dermot Farrell, general-manager at Lakeland Dairies' food service division.

"Our customers require confidence and an assurance that there are quality checks in every link of the supply chain, so as to guarantee that the food they eat is nutritionally beneficial and healthy.

"Lakeland Dairies has been doing business in China for five years and we are currently shipping a range of long-life dairy creams, cream blends, ultra-high temperature milks and flavored milks, through a number of trading partners."

UHT pasteurized milk, which has a typical unrefrigerated shelf life of six to nine months when unopened, has become more popular with Chinese consumers.

Barnes says he expects the growth in UK food and drink exports to continue as British companies see China as a key strategic growth target.

"This year the growing strength of the British pound has made selling overseas harder for British exporters, and the Chinese economy has not grown as robustly as in recent years. However, UK food and drink exports are in a strong position right now as they have doubled in value over 10 years and we see significant growth opportunities in China and other markets," he says.