Wealth of options for China's super-rich

The number of Chinese billionaires swelled to 596 in 2015, which saw the country overtake the United States for the first time, according to Hurun Report, a market intelligence company.

"Despite the economic slowdown, China's richest people created more wealth in one single year than any country has ever done before," says Rupert Hoogewerf, the chairman of Hurun, who has tipped China to become the world's top luxury tourism market.

How to tap that potential is the question now being asked by those in the industry. 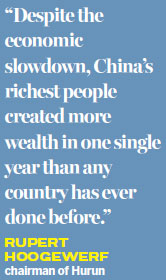 A Hurun/International Luxury Travel Market Asia report released in May says half of all super-rich travelers flew business class in 2014, compared to one-third the previous year.

Chinese luxury travelers have grown more accustomed to good service and well-planned itineraries, says Steve Spivak, vice-president of global sales for Tauck, the US-based tour organizer. "Itineraries that offer rich, exotic experiences are now popular with super-rich travelers, such as our Amazon River cruise or an expedition to a Kenyan national park."

Li adds that tours to the Arctic and Antarctica led by scientists and accompanied by professional photographers are also best-sellers.

The Hurun/International Luxury Travel Market Asia report says Antarctica was the most popular destination among China's high net worth individuals in 2014, especially during the Chinese New Year break. Other top luxury destinations were in the Maldives, Australia, Dubai and France.

The report says the United Kingdom and Italy have seen significant increases in their popularity and forecasts that Europe will rank first in terms of luxury leisure travel over the next three years.

"Leisure and global travel are set to be the themes for the next three years, and next is polar exploration," the report says. "Super-rich travelers, while hoping to try novel and extreme challenging experiences, crave physical and spiritual relaxation during their travels and vacations."