The e-commerce giant, which accounts for 8 percent of retail sales in China, said the Nov 11 sales figure was 60 percent higher than the 57.1 billion yuan it took on the same day last year. 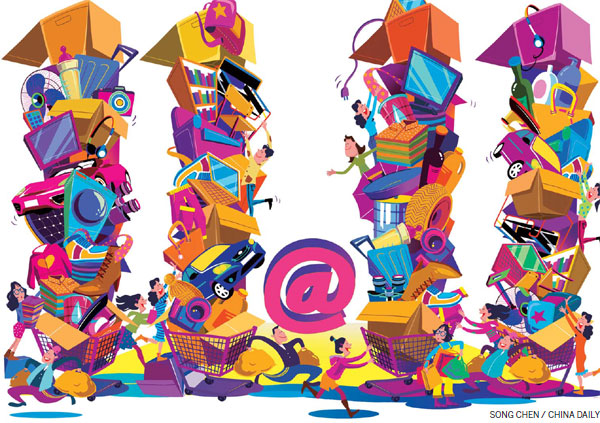 Smartphones were among the best-selling items on Alibaba's online platforms this year, with 3.13 million units sold in 24 hours.

The company, headquartered in Hangzhou, Zhejiang province, says it will apply to Guinness World Records to be recognized for record sales in eight categories, including apples, cars, honey, milk and television sets.

Jack Ma, Alibaba's executive chairman says Nov 11 represents only a small part of the huge potential for domestic demand in China. Hundreds of thousands of businesses benefit from the day, not just Internet companies.

"China has a middle-class population of 300 million. We believe there will be 500 million within the next 15 years, which would bring huge demand for high-quality products, thus boosting economic growth," he says.

This huge demand presents opportunities not just for China but for the world as well, he adds.

The annual one-day shopping festival that Alibaba initiated six years ago has turned into a multibillion-dollar online celebration of Chinese buying power, with online retailers slashing prices on products and online shoppers treating themselves to myriad discounted goods.

As China's economy has entered what has been called a new normal phase over the past few years, the country's leaders have repeatedly underlined the importance of consumption in driving growth.

"It is clear that with some creativity, domestic demand can be boosted. Nov 11 has proved itself to be an effective way of stimulating consumption."

A celebrity gala Alibaba held on Nov 10 served as a perfect warm-up to attract attention to the sales event, Cao says.

Alibaba and its biggest e-commerce rival in China, JD.com, both held star-studded events, broadcast on TV and over the Internet. In some cases, shoppers were able to win discount coupons simply by shaking their mobile devices.

Zhang Yong, chief executive of Alibaba, says many of the celebrities who performed at its gala were endorsers of brands sold through his e-commerce platform.

"It is a very effective way of raising the profile of brands," he says.