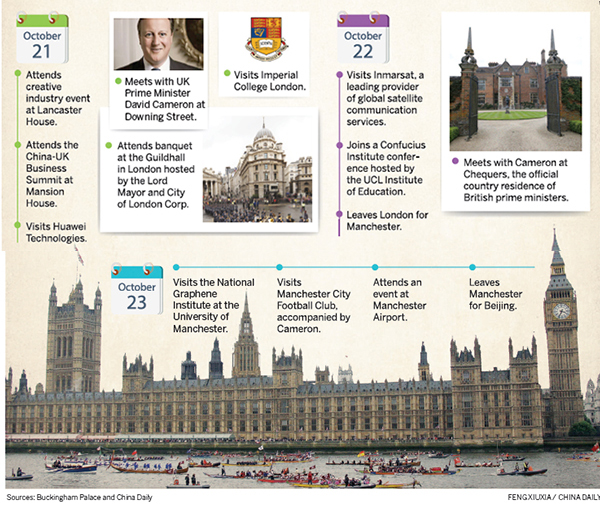 Deals worth billions of pounds are expected to be signed during the visit in areas including finance, nuclear energy and education.

The most anticipated one is China's participation in Britain's nuclear plants, which, if realized, will be a milestone in Chinese nuclear expansion into developed countries.

Xi said, "China is ready to pursue cooperation of various forms with the UK and other countries in international production capacity and equipment manufacturing to synergize respective strengths."

Commenting on obstacles Chinese firms meet in their global expansion plans, Xi said, "Problems that occur in business operations should not be politicized, and Chinese companies should not be viewed with bias.

"There should be no swing doors or glass doors that are placed as non-economic or non-market-based barriers."

Britain has been advancing efforts to make London a key platform for the globalization of China's currency.

Xi said China is ready to consider strengthening the connectivity of the two countries' financial markets, and London can leverage its unique strengths in the financial sector in the modernization and globalization of China's financial market.

Feng Zhongping, a European studies expert and vice-president of the China Institutes of Contemporary International Relations, said "China is paying more and more attention to the UK's service sector, while the UK is eager for China's financial investment.

"In the past, it was China's market in exchange for the UK's capital and technology. Now the pattern is changing."

Zhang Zhizhou, professor of international relations at Beijing Foreign Studies University, said he preferred to describe current Sino-British relations as more of a "mature marriage" than a "honeymoon".

"The mutual trust between China and the UK is fairly strong," Zhang said. "Even if there is some unexpected episode, the bigger picture will not be affected."

Xi last visited the UK in 1994 when he was an official in Fujian province.