Battles on under dark skies for boom

The latest report on China's inbound tourism issued by the China Tourism Academy offers little relief from the gloom that has settled over the industry in the past two years.

Since the first quarter of 2012, figures that the industry would like to see going up have headed in the opposite direction, says Dai Bin, president of the academy. 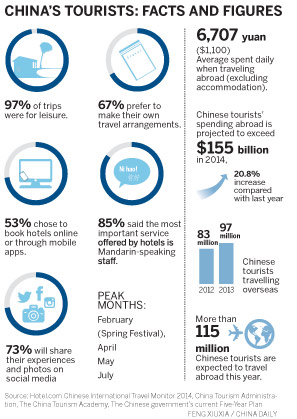 "And there is no sign that they will bounce back soon," he says.

Among the factors contributing to the falling numbers of inbound tourists are smog, the appreciation of the yuan, a sputtering global economy and increasingly competitive tourism destinations in the East and Southeast Asia, Dai says.

"The smog has really tarnished Beijing's image, resulting in many potential foreign visitors opting to stay away from this ancient city."

According to the report, 75.5 percent of inbound tourists said they were "basically content" with their stay in China last year, 11.4 percent lower than in the previous year. Some of the respondents said they were unhappy with the environment, including water supply and air quality.

Yang Jinsong, a professor with the China Tourism Academy, who is a specialist in international tourism, says: "No one wants to be on what is supposed to be a relaxing holiday but then find themselves choking with smog. This persistent pollution, which is particularly bad in the fall and winter, is like having a door shut in your face."

To better promote inbound tourism, Yang says, the country ought to tap its potential in business tourism under the acronym MICE, meaning tourism related to meetings, incentives, conferences and exhibitions.

The Hilton Sanya Resort and Spa in the island province of Hainan says that 10 percent of its guests are from overseas, many on business trips or attending conferences.

Yang Chen, director of sales and marketing of Kunlun Hotel in Beijing, a member of the Preferred Hotel Group of Chicago, says overseas visitors account for 40 percent of its guests. The 29-story hotel, which opened in 1986, has 575 rooms and most of its guests are in Beijing on business or for conferences, it says.

The China National Tourism Administration says that in the first nine months of the year, 96.5 million tourists visited the country, 1.48 percent fewer than in the corresponding period last year. Of those visitors, 4.09 million were European, including 1.59 million from Russia, 480,000 from Germany and 441,700 from the United Kingdom.

Apple hits back at malware in China