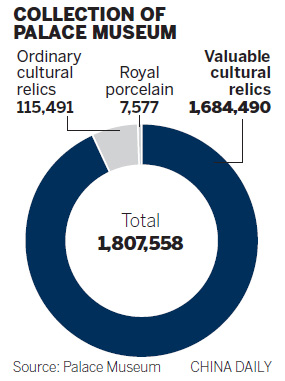 Beijing - After seven years of surveying, members of staff at the Palace Museum in Beijing have finally completed an inventory of the many treasures housed at the former Qing Dynasty (1644 -1911) palace.

The Palace Museum has a total of 1,807,558 items in its collection, it revealed on Wednesday.

"This is the first time that such a thorough survey of the treasures in the museum has been made since it was founded on Oct 10, 1925," said Chen Lihua, vice-dean of the museum, who has led the survey team since the project began in 2004.

Among the collection, 1,684,490 items are regarded as valuable cultural relics under State protection, while 115,491 are considered ordinary cultural relics and 7,577 are sample pieces of royal porcelain, according to Lou Wei, director of the museum's cultural relics department.

Although the museum's contents have previously been surveyed four times, this is the first time that it has been established exactly how many pieces of treasure it houses, Chen said.

The first survey, which began in October 1925 and was completed in March 1930, catalogued more than 1.17 million items in the museum's collection.

In 1931, when the Japanese army occupied northeast provinces in China, the museum's treasures were moved south by the Kuomintang government.

Approximately 650,000 items were taken to Taiwan before 1949 and are housed as part of the collection at the Taipei Palace Museum.

Another segment of the collection was taken to Nanjing Museum and the rest was returned to the Palace Museum in Beijing in 1945, following the War of Resistance against Japanese Aggression.

After 1949, the museum acquired another 250,000 pieces of cultural relics that were donated by private collectors.

Three further incomplete surveys were conducted in 1954, 1978 and 2002. All of them failed to generate a complete database of the museum's contents.

A large number of the museum's cultural relics were overlooked in the past, because the museum was viewed as a repository for ancient Chinese works of art, Chen said.

In contrast, all items are now taken seriously, including examples of calligraphy and ink paintings by emperors and their concubines.

Rare printed and hand-copied books have now also been catalogued, as well as carved blocks that were used by the royal printing house and the blueprints of royal buildings.

As a result, in addition to the 940,000 items that were already officially recognized, the survey has reclaimed at least 860,000 items, Chen said.

With the findings of the latest survey, over the next decade the museum plans to publish a comprehensive catalogue of its contents. An electronic version will then be placed on the museum's website at a later date for use by scholars and the general public.

Earlier this month, the museum began to publish catalogues of its treasures, which fall into 26 categories and are expected to run into 500 volumes. The project may take 10 to 15 years to complete, Chen said.

The first 30 catalogues, featuring works of sculpture, jade, enamel, calligraphy and painting, have just rolled off the presses at the museum.