BEIJING - China does not want to "replace" the United States from its dominant role in the world, and the world should not fear China's rise, the country's top diplomat wrote in an essay.

State Councillor Dai Bingguo said that China would not engage in an arms race, as the country's resources were better spent on development and ensuring its people had enough to eat.

"The notion that China wants to replace the United States and dominate the world is a myth," Dai wrote in the essay carried on the Foreign Ministry's website (www.mfa.gov.cn) late on Monday.

"Politically, we... respect the social systems and development path of the different peoples of the world," he added.

"Economically, we wholeheartedly want to continue to develop," Dai wrote. "Militarily, we are not engaged in an arms race."

Dai said the world had no reason to fear China.

"The international community should welcome and not fear China's peaceful development, help it and not hinder it, support it and not hold it back," he wrote.

But the world also needed to "understand and respect China's reasonable interests and concerns."

China will also be "actively involved" in global issues relating to the North Korean and Iranian nuclear programs, the Arab-Israeli conflict and Sudan's Darfur, and "a responsible participant in the international system," Dai said. 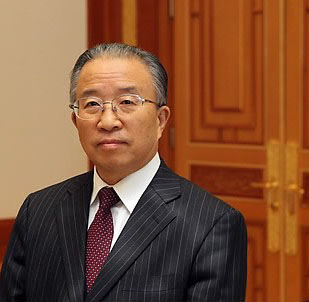