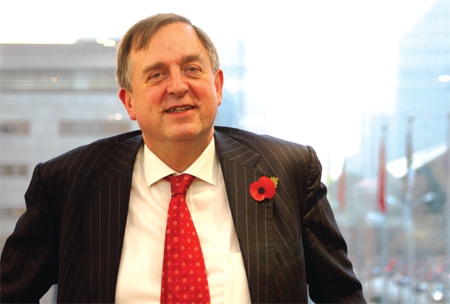 A veteran of business in China, Peter Batey says it is vital that the relationship between China and Europe does not become stale. [Photo/China Daily]

There was one way to guarantee an audience when he first started doing business in China nearly 25 years ago, Peter Batey says. For a Westerner, just stringing a few Chinese words together was almost like a circus act, the 52-year-old chairman of private equity and corporate advisory firm Vermilion Partners says. "It was such a shock to everyone when a foreigner opened his mouth and uttered Chinese words. People almost stood there astonished," he recalls. Batey, who was president of the EU Chamber of Commerce during 2001 and 2002, was only in his late 20s when he arrived in 1986 to set up the China operations for international accountants Arthur Andersen in a hotel room at the famous Beijing Hotel in Wangfujing.

"That's how most people started in business in those days. We moved from a room to a suite and then a larger suite."

China then was largely cut off from the rest of the business world. For Batey, outside communication was a telephone in the lobby of the Beijing Hotel which had to be booked in advance.

"You had to go down to the telephone girl in the lobby and book your call and they would connect you to Hong Kong in two or three hours. The cost of calls was also astronomical.

"In those days we also used telex quite a lot. We used to have conversations on it. We would type in a few words and someone at the other end would type a few words back."

Batey says there have been a few staging posts since then in China's trading relationship with Europe and the rest of the world.

He says a key turning point was former Chinese leader Deng Xiaoping's tour of southern China in the early 1990s which set the economy on the road to modernization.

"It was very important because at that point China began to see foreign investment as not purely about foreigners coming here to invest or export but also address the domestic market as well," he says.

Another historic step forward was China's accession to the World Trade Organization in 2001.

In the last 10 years since the EU chamber was formed in China, there has been a near explosion of business activities between China and Europe.

Batey says it is vital the relationship between China and Europe does not become stale and that there have been recent frustrations expressed about access to the Chinese market, particularly from the financial services industry.

"In the last few years there has been greater impatience among European companies actually, a much more jaundiced view after the optimism in the early years of WTO accession.

"I think this applies mostly to financial services, commercial and investment banking, insurance, futures brokerage and asset management. It is time China looked again at the regime of access to services so that people can establish a presence here on a wholly-owned basis rather than through a joint-venture arrangement."

Batey graduated from Keble College, Oxford University, and worked for Citibank in the early 1980s before becoming political private secretary to former British prime minister Edward Heath, who was a frequent traveler to China.

"He was a regular visitor to China and had a long term relationship with former Chairman Mao (Zedong), Zhou Enlai and Deng Xiaoping. It was from him I got the China bug and decided I want to come out and live here," he says.

His initial work for Arthur Andersen was in facilitating joint ventures between foreign and Chinese companies.

He went on to set up his own business, which he sold in 1999, before starting Vermilion Partners in 2005.

It offers a range of merchant banking and corporate advisory services and has offices in Beijing, Hong Kong, Shanghai, Shenzhen and London, employing 50.

He says that while many things about doing business in China have changed over the years, some traditions remain.

"The culture of doing business in China hasn't changed that much. It is still very much relationship-based. You have to have a relationship with people before doing business with them. I think the instinctive reaction of a European is to trust another European. In China they want to look you in the eye and assess the cut of your jib," he says.

Batey, who was made an O.B.E. (Officer of the Order of the British Empire) for services to Sino-British trade, says although the early days were a bit rough and ready for foreigners, China has lost some of its character.

"It has lost some of its charm. The fascination for me coming here was to understand the culture of a country that had been closed for a long time. People thought in different ways and acted on different imperatives. It was marvelous being in such an oasis.

"China has since become much like everywhere else. The same motivations, which are largely pecuniary and so therefore in a way it is less fascinating being here. On the other hand, opportunities have absolutely mushroomed."

Batey, who now spends part of the time in the UK, where he has a house in Durham, says one surprising aspect of modern China is that most things are cheaper than they used to be, apart from labor.

"In the early days housing accommodation was extremely expensive. Commercial offices cost more than they do now. Staff expectations of salaries have risen exponentially, however, so cost profiles have completely changed."

Batey, who now speaks Chinese himself, says another major difference in the business community was the extent to which Mandarin is now spoken.

"There are many foreigners who speak Chinese now. Mine just rumbles along. I read the characters badly though. Don't ask about the writing."

Batey believes over the next few years China's relationship with Europe will go through a further evolutionary stage.

He sees Chinese companies being much more acquisitive, particularly in sectors in which European companies are globally dominant.

"Chinese companies have bought fashion goods companies, handbag makers etc, but I think this sort of activity has only barely began. Chinese companies will be focused on buying technology, distribution and brands," he says.

"As an economic bloc, it is already bigger than the United States and will remain very important for the Chinese economy."