"There will be industries that will become less competitive in this environment, so the challenge is maintaining stability and managing change to minimize economic disruption," he says. "This will be achieved by equipping the workforce of tomorrow with the skills and education to keep pace with technological change. As China moves its reliance in GDP growth from infrastructure investment and exports to consumption, the high growth of its new economy will be critical."

One big advantage of the two-speed economy is its ability to help China avoid the so-called middle-income trap, says Robert Davis, a senior portfolio manager at NN Investment Partners.

The middle-income trap is when a developing economy starts to lose its low-cost labor competitiveness but does not have the technology to compete with advanced countries.

For example, newly industrialized countries such as South Africa and Brazil have not, for decades, left what the World Bank defines as the middle-income range. They suffer from low investment, slow growth in secondary industries, limited industrial diversification and poor labor-market conditions.

"China's rebalancing program is intended precisely to move across this gap and avoid the trap," Davis says. "The difficulty is that reforms are usually needed to allow for productivity growth and innovation development" that are needed for this to happen. 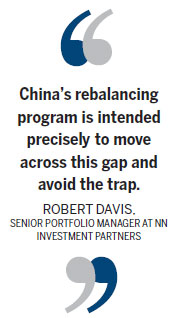 Unlike South Africa and Brazil, China's two-speed growth model is driving investment into services and high-tech industries, while making its manufacturing industry more high-tech. Within this context, industries like e-commerce, Internet industries and healthcare insurance are growing fast because of the emergence of China's middle class and the growing spending power of this population.

China's service purchasing managers index measured 50.5 in September compared with 49.8 for manufacturing. The PMI is an indicator of business activity based on surveys that measure respondents' perceptions of key business variables.

In addition, many of China's other economic indicators also paint an optimistic picture. For example, the retail sector is registering 11 percent year-on-year growth, according to official data.

The manufacturing sector has been vital to China since the government started the process of reform and opening-up in the late 1970s, which led to an export-driven boom.

During this time, China made good use of its low-cost labor supply and its domestic production's economy of scale to manufacture low-end products, and used a managed currency exchange rate to help ensure its export competitiveness. This model of growth coincided with the debt-fueled demand for goods by many Western countries.

Jan Dehn, head of research at Ashmore, an emerging-markets investment management company in London, says this model was successful between 1980 and 2008, but after the financial crisis its basis disappeared due to weakened demand from Western countries, the appreciation of the renminbi and rising labor costs.

To find new ways to grow the economy, he says, China should rely more on domestic consumption, which the country can realistically achieve because its savings rates are almost 50 percent. In addition, its exporters must increase productivity, so that they can continue to be competitive despite a stronger currency over the medium term and rising labor costs at home.

Dehn also says China should take this structural shift as an opportunity to find new competitiveness for its manufacturing industry, using innovation and large-scale domestic consumption as key advantages.

Russia says it has proof of Turkey's support for IS