China is prepared for risks pertaining to yuan inclusion in SDR 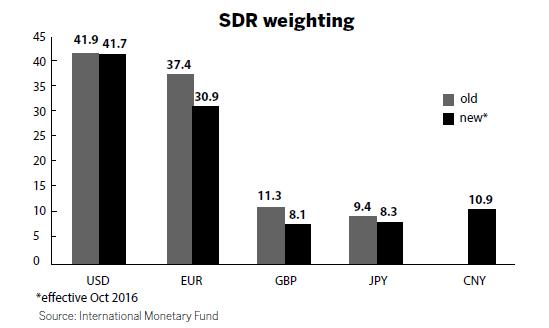 China is ready to cope with possible risks arising from the renminbi being included in the IMF's reserve currencies basket, a senior official said on Tuesday.

The global financial body decided on Monday to include the Chinese currency in the basket.

The decision will give the renminbi the third-highest weighting, or 10.92 percent, after the US dollar and the euro in the special drawing rights basket. It was taken after the International Monetary Fund recognized the renminbi as being "freely usable".

Volatile cross-border capital flows and more fluctuations in exchange rates are likely following the move, which will also lead to a further opening of the Chinese financial market, according to economists.

"We are ready for the inclusion," said Yi Gang, deputy governor of the People's Bank of China, the central bank, at a news briefing.

China will continue its foreign exchange reform aimed at building a market-oriented regime without government intervention, or a "clean float", but it needs a transitional period, he said.

"We are able to keep the renminbi's exchange rate stable at a reasonable level," said Yi, who also pledged to prevent unexpected capital flight that may cause a systemic financial crisis.

The IMF said on Monday that the renminbi met all criteria for it to be included in the SDR basket.

The decision will take effect on Oct 1 next year to enable the continued smooth functioning of SDR-related operations and to allow sufficient lead time for adjustments, according to the IMF.

The composition of the basket is typically reviewed every five years by the IMF's Executive Board to ensure that the basket reflects the relative importance of currencies in the global trading and financial systems.

Wang Tao, chief China economist at UBS AG, said the SDR inclusion will accelerate renminbi internationalization, and is also a milestone in the integration of the Chinese economy into the global financial system.

"Foreign central banks and sovereign wealth funds are expected to increase investment in renminbi assets when it becomes one of the global reserve currencies, which requires more reform measures to prevent potential risks," she said.

This year, China's central bank has taken a series of reform measures.

These include the adoption of a market-oriented daily exchange rate-fixing regime; allowing foreign central banks and international financial organizations to access the onshore bond and foreign exchange markets; and setting freer interest rates.

IMF Managing Director Christine Lagarde said on Monday in Washington, "The renminbi's inclusion in the SDR is a clear indication of the reforms that have been implemented and will continue to be implemented, and is a clear, stronger representation of the global economy."

A research note from JPMorgan Chase and Co forecast that by the end of this year the renminbi's value may drop slightly to about 6.4 against the US dollar, with a possible rate increase by the US Federal Reserve and further monetary easing by the European Central Bank in December.

The SDR system was created by the IMF in 1969 to supplement its member countries' official reserves.