Mao Dun Literature Prize winner Liu Xinglong has been recognized for his poetic evocation of the bitterness of country life. Yang Guang reports.

Liu Xinglong was still wet from his morning swim, when news came that he had won the 2011 Mao Dun Literature Prize, the country's most prestigious award for novels, given every four years.

More than 600 congratulatory short messages and countless phone calls arrived within the day. The 55-year-old Wuhan-based writer replied to each one until the wee hours of the next morning.

Locally-sponsored teachers used to be widely seen at elementary and secondary schools in China's less developed regions. As opposed to government-paid teachers, they are paid by local communities and their salary is more often than not meager.

Since 1992, the central government has promulgated a succession of regulations to raise their income and gradually turn them into government-paid teachers.

According to Liu, there used to be over 100,000 minban teachers in Hubei province and more than 4 million nationwide. He calls these rural intellectuals "national heroes without spectacular feats".

Without them, our national history wouldn't be what it is, he says.

In Heavenly Mission, they survive with bitter poignancy in poverty-stricken Jieling, where the saying goes that it is better to die in the sewer pipes in cities than live by the clear spring of the village.

Headmaster Yu and teachers Deng Youmi and Sun Sihai have to cultivate the farmland to feed themselves and subsidize their students. Their dreams of becoming government-paid teachers are shattered again and again for various reasons.

Liu says he cried for his protagonists while writing. His empathy comes from personal experience. "My own education was completed mostly by minban teachers," he explains.

Liu and his elder sister were taken to a small town in the hinterlands of Dabie Mountain when he was 1. Following his father and his search for work, he moved with his family a dozen times around rural villages and towns. He finally settled down in various cities after 36.

"I'm not a smart person in terms of writing, not at all," he confesses, "and there is nothing to hide about it".

"I always write and publish slowly and I think that's the right rhythm for me."

His early works, of which Mystery of the Dabie Mountains series is representative, are characterized by rich imagination. But an anonymous poem he read by chance in 1988, entitled A Bowl of Oil and Salt Rice, precipitated his switch to realism.

The day before yesterday, I came home from school

Yesterday, I came home from school

But found nothing in the wok

Today, I came home from school

Made a bowl of oil and salt rice

And put it in front of mom's tomb.

"I suddenly realized the truth of art - it brings about the strongest effect and profoundest revelation with the simplest form and reason," Liu says.

He quoted the poem in his 1992 novella Country Teachers, which was an instant hit and became the first of the three-part Heavenly Mission years later.

Following the success of Country Teachers, Liu received a multitude of letters from enthusiastic readers, asking for a sequel. He thought the timing was wrong, until one day, when strolling on the street, he was struck by the name of an outdoor sports goods store, Heavenly Mission.

But the actual writing only took place after he learned about the life of Fan Xiaoxia, a country teacher in the mountainous region of Sichuan province.

Fan and her husband were both country teachers but taught in distant schools. During their 14 years of separation, the couple encouraged each other with characters in Country Teachers. They finally reunited in 2008, but Fan died a dozen days later in the disastrous Wenchuan earthquake.

During his 30-year writing career, Liu says he has persevered with the belief that the marrow of a novel is to reveal the elegance and dignity of human nature. 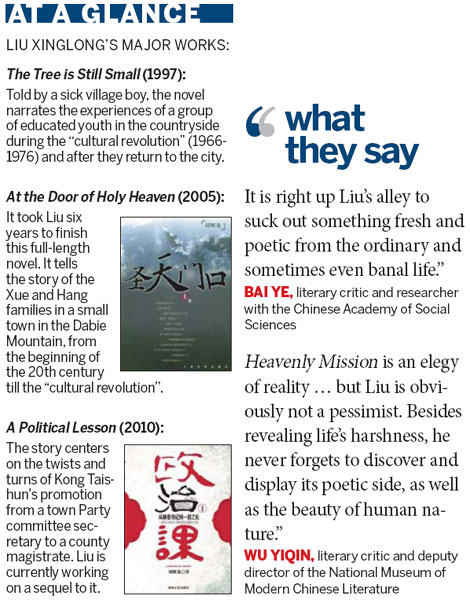 Cover story: Journey to the West

Hot spot: Shaping up, shipping out