It shot to fame with thanks to the BBC series Are Our Kids Tough Enough? Chinese School, which generated a heated debate in Britain and China about contrasts in the nations' teaching methods.

Now, its head teacher, Neil Strowger, is invited to conferences in China, while its students have had to get used to Chinese visitors peeking through their classroom windows. Some even greet the visitors with ni hao (hello in Chinese) and a friendly smile. 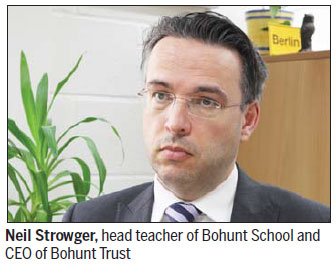 Despite its large appeal, Strowger says the BBC series was a sitcom more than a serious documentary, arguing that it "was produced as entertainment rather than educational research".

"The editing painted a very simplistic storyline: hardworking Chinese teachers battle poor behavior to ensure success in tests versus English teachers who are very student-centered but are 'too nice' and so lose," he says.

In the three-part program, five Chinese teachers taught 50 students for four weeks at Bohunt School. The finale ended with tests in which the students studying the Chinese method achieved marks about 10 percent higher in math and science compared with the rest of their year group, who were taught by their regular teachers in the English manner.

Strowger says genuine educational exchanges did occur between the Chinese and English teachers during filming but were deleted in the editing process. Teachers often observed each other's lessons, he says.

"They (the Chinese educators) would regularly come and talk to our teachers about, 'I'm really struggling with these students, what can you suggest?' So there was an awful lot of collaboration," adds Philip Avery, director of learning and strategy for Bohunt Trust, which operates the school.

As a result of the exchanges, teachers at Bohunt have adopted a wider range of methods, including those used widely in China.

The school has also readjusted the structure of its science department, with heads of department now overseeing the three disciplines - biology, chemistry and physics - rather than overseeing groups of students divided by age.

Internet regulations: From the US to Australia