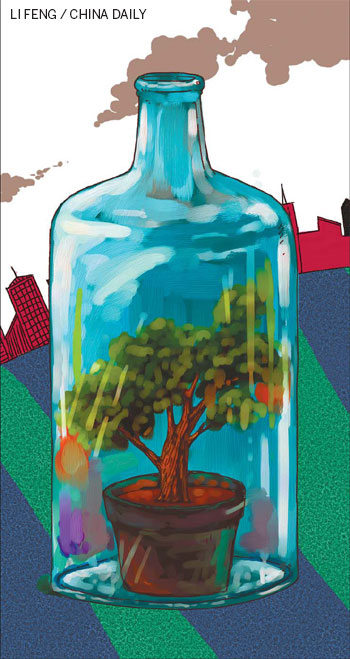 To thrive Chinese culture needs much more than a favorable regulatory or financial framework.

The strength of culture comes from freedom of the mind more than the overflowing of capital. That is the underpinning that was left untouched at a key leadership meeting earlier this week.

It caught many by surprise that a plenary session of the Communist Party of China Central Committee threw its weight behind such a seemingly fluffy and perennially vague issue as culture. Anyway, feeding a population of 1.3 billion is no easy task and now, entertaining them has emerged as a growing necessity. But, as the event seems to indicate, there is a sense that there is money to be made here and the authorities are ready to lend their support.

That is a far cry from the early years when speaking of culture and industry in one sentence would incur the wrath of a vast legion of purists. The reform of China's cultural system did not start this Tuesday. In the early 1980s when some teahouses in the southern city of Guangzhou, usually lounge cafes in upscale hotels, started playing pop music in the background or even hiring glamorous singers, it signaled the beginning of a groundswell. Yes, culture can be in lockstep with business - and popular demand.

After three decades of dilly-dallying, the baby steps forward are going to accelerate into a grand march. Someone up there has realized that you'd be regarded as boorish if you roll in cash but are pitifully deficient in sophistication. Look at those laughing-stocks who flaunt their newly gained wealth on the least cultured pursuits imaginable. And China definitely does not want to be a national epitome of that dramatic persona.

It wants respect. And what can command more respect than, say, playing Chopin in an acoustically impeccable concert hall?

Hence, we have the mushrooming of grand theaters across the nation, the envy of performing arts programmers the world over. However, infrastructure can be bought, but what happens inside these magnificent halls of art requires more than money. In short, it needs an environment.

To paraphrase the Chinese saying of growing trees and grooming talent, it may take a generation or two to fill these venues with audiences with the capacity to appreciate the performances. Culture can be nurtured; it cannot be pounded into the public.

The new stance marks a fundamental shift from culture as pure ideology to culture as at least partly business. While the manufacture and distribution of regular goods were freed from government-ordained restrictions with the reform and opening up of the economy, culture was always made an exception owing to its power of persuasion.

In a sense, culture was deemed as devoid of commercial values and used in a way corporations used promotional materials.

The realization that the world's most influential "cultural" entities are not governments, but private businesses, surely came to decision-makers as an epiphany that could have been at first mind-boggling but on second thoughts worth imitating. In the age of globalization, there is little hope for a government agency to spread messages as effectively as a well-positioned multinational media empire.

Some people interpret Chinese culture as mostly Confucian, which is effective as a common thread but too narrow in scope. The past century of fluctuation in Chinese reception of Confucianism is testament to its complexity and incongruity with some modern thoughts. Suffice to say, not all of its principles click with all of us. Take absolute obedience, a key tenet of Confucian thought. Is it possible to ask a son to obey a father regardless of who is right? Or, more ludicrous, ask the mother to obey her son once her husband is gone - how feasible is that?

Disney's Mulan offers an exercise in cross-cultural connection. Mulan was traditionally a symbol of filial piety and loyalty to the ruler. Yet, the animated film substitutes this Confucian ideal with love - Mulan's love for her father and her nation, which is universal and happily espoused by people around the globe, and the cartoon giant did it without changing the narrative structure (though it did impose an Asian-American - rather than typically Chinese - aesthetic on the portrayal of feminine beauty).

One can also argue that the original theme of Mulan was diluted when it was transposed to the globally acceptable concept of love. On the other hand, one cannot rule out the element of love even in the original tale. Cultural promotion can be achieved by emphasizing either the differences or the common grounds shared by all cultures. But the result could be vastly different if the approach is applied with or without consideration of the target audience.

Cultural pollination happens every day - when a foreign tourist asks for directions or when a Chinese samples foreign food. An important factor is receptiveness. Take the adoption of English names for Chinese. While in school, English majors like me chose English names for fun, and later in workplaces for convenience. But if we were forced into the practice, many of us would have rebelled against it.

Diversity is the tapestry that covers the wall of life. Chinese culture has a lot to offer, but as it is, its reach is limited. It is natural to expect Chinese culture to be appreciated by an expanding number of the world population as the Chinese economy gets integrated with the global economy. As the world is more exposed to Chinese culture, it will also have a better understanding of the Chinese way of doing things.

But culture does not equal politics. Under some circumstances, one can love a culture without caring much for those who push for it. Many youths in the Middle East are crazy about Hollywood movies, yet they hate the United States or the values it stands for. Chinese culture is so rich and diverse in its manifestations that it is quite conceivable that an outsider may like some parts of it but are indifferent to the others. So, there is no logical link between singing Chinese songs at karaoke and singing praise of what China does on the world stage.

Most importantly, the vim and vigor of Chinese culture would come from the unleashing of individual creativity. If you put an athlete in a straightjacket and shove him onto a sports arena, he will lose hands down. Likewise, if you confine Chinese writers and artists to certain subject matters or creative styles, they will be at a huge competitive disadvantage.

On a deeper level, our educational system should be revamped to encourage out-of-the-box thinking. Right now, conformity rules so absolutely that sparks of imagination and innovation are smothered in the junior years of one's upbringing. A local government was laughed off when it announced a 50 million yuan ($7.84 million) program to groom 1,400 Steve Jobs-like talents. While financial investment is mandatory for education, geniuses like Jobs or his ilk do not roll off an assembly line. They need the freest possible environment to let their brainpower fly. Given the way our kids are indoctrinated, it is a miracle anyone of that league will survive the relentless clipping of the wings of unorthodoxy.

The best way for Chinese culture and its practitioners to prosper and be loved by the whole world is to let them fly free.

Cover story: Journey to the West

Hot spot: Shaping up, shipping out