Eyeing the goal in European football

Chinese investors are making unprecedented inroads into professional football in the UK and elsewhere in Europe.

They are being spurred on by the twin goals of investing overseas and President Xi Jinping's stated aim of making China a football powerhouse.

In the latest example, Reuters reported Chinese brokerage Everbright Securities and Beijing Baofeng Technology, an internet entertainment company, as saying they are behind a deal to buy a 65 percent stake in MP & Silva, a sports media rights firm. The deal values the company at more than $1 billion.

Behind the sudden surge of interest is Xi's determination to create a sports economy worth nearly $850 billion by 2025, according to Simon Chadwick, professor of sports enterprise at Salford University.

"When you think about it, that's extraordinary. At present, you have a worldwide sports economy worth about $400 billion. Yet one country is looking to double that by 2025 for itself alone."

He has seen a change of emphasis in Chinese investment since the start of this year, from the straightforward acquisition of clubs, or stakes in clubs, to investing in football service organizations such as sports agents.

"It's a sort of integrated supply chain strategy, by investing in and attempting to control the sport from the grassroots to elite levels," Chadwick says.

A relatively unknown Chinese businessman, Xia Jiantong, paid a reported 70 million pounds ($102 million; 92 million euros) for English club Aston Villa, according to the club's website. Villa won only three matches last season and was relegated from the Premier League to the second-tier Championship.

Villa spokeswoman Gemma Duah said Xia was not available for an interview. On his website, he says he became a Villa fan many years ago.

The takeover must be approved by English football authorities, who will decide if he is "a fit and proper person" to exercise control over a club.

The Villa case is significant in that it is the first time a club has been acquired virtually at the same time it has been relegated from the top tier of English football, and the first time a Chinese investor has acquired a 100 percent stake in a club.

Meanwhile, the AC Milan deal has a deadline of June 16, and the Chinese group is negotiating a price with Berlusconi's Fininvest Group.

Italian media report the price is about 700 million euros ($778 million), but Berlusconi has told reporters he wants to stay on as club president for another three years and that was originally the main sticking point.

He has owned the club for more than 30 years, but was forced into discussions to sell it by shareholders of Fininvest and family members, according to the Football Italia website.

He later said he wanted to sell the club to Chinese investors, because he did not want to put more money into it.

"The Chinese want to kick me out," he told reporters. "I am the problem holding up the sale. I want a clause that will allow me to remain as president for another three years, but they do not agree."

The person familiar with the talks says both sides agreed that Berlusconi would remain as president for the next two or three years, until the Chinese investors acquire the remaining 30 percent.

Fininvest has also requested a list from the Chinese side of the investors involved and the percentage each would take, the source says.

According to Khaldoon al-Mubarak, Manchester City chairman, "Football is the most loved, played and watched sport in the world, and in China the exponential growth pathway for the game is both unique and exciting."

But it is not just about acquiring clubs. Reuters reported this month that four Chinese investor groups, including one led by model carmaker Rastar Group, were competing to buy Stellar Group, one of the world's most powerful football agencies.

Control of UK-based Stellar would give its owner serious influence in player transfers, according to analysts.

Although no formal price has been announced, figures in the region of 900 million yuan ($137 million, 122.8 million euros) are being discussed, and Stellar founder Jonathan Barnett is planning to travel to China to meet potential buyers, Reuters reported.

"We believe the Chinese football industry has a bright future," Mendes said.

Jack Ma's Alibaba Group is in talks to become a major sponsor of the FIFA World Cup. Dalian Wanda is already a sponsor.

English clubs are also seeking to tap the huge resources in China.

Manchester United has an estimated 100 million-plus fans in the country, with vast marketing opportunities for replica shirt sales and other memorabilia. 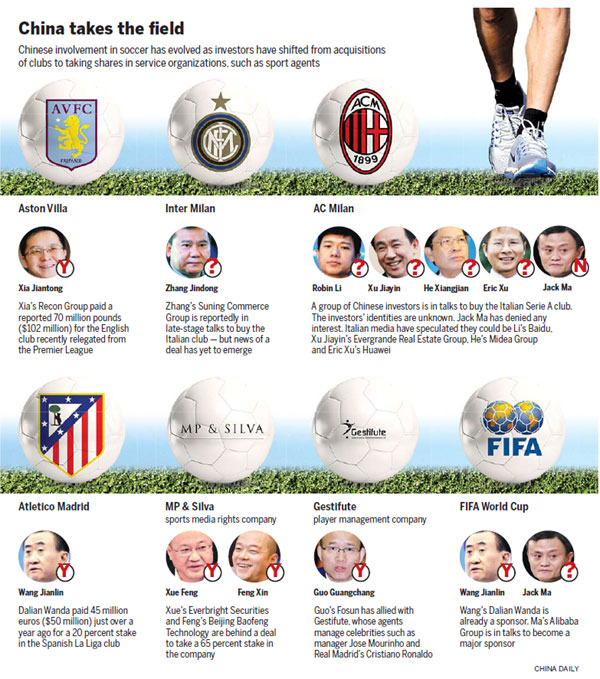