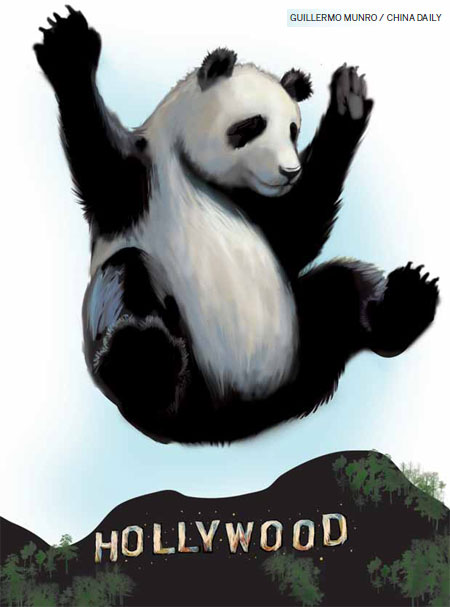 Christopher Bremble was texting a friend at the Emmy Award Ceremony in 2010. His company worked on the visual effects of the fifth episode of HBO's miniseries The Pacific. He'd never imagined he'd win, because he was up against the show's pilot, and pilots usually take the top spot.

"We didn't " he was about to text "win" when someone lifted him out of his chair and said: "That's you."

"Next thing I knew was I texted walking along the aisle, 'no, we win, we win'," Bremble recalls in his Beijing office.

The 2010 Emmy Award for Outstanding Special Visual Effects for a Miniseries, Movie or a Special went to his company, Base FX, a team of about 230 people, all but 10 of whom are Chinese. It was the first time a Chinese team won an Emmy. But the glorious scene might be repeated.

China has been working hard to increase its global soft power. While Chinese films rarely enter Hollywood's mainstream cinema scene, Chinese specialists of CG, animation and 3D technology have been involved in such Hollywood blockbusters as Mission: Impossible, Super 8 and Spider-Man.

The overwhelming majority of Pixomondo's Beijing and Shanghai office employees is Chinese. Ten of its 12 global facilities worked on more than 800 shots on Hugo. The Chinese teams took over a substantial part of the work.

Founded in Germany, Pixomondo set up its Beijing and Shanghai offices in 2009. Base FX arrived in 2006, when Bremble wanted the visual effects for his directorial work, Deep Rescue, created in China. The lower price of labor seems an obvious reason for choosing the country.

"In China the labor price, in some ways, is only 20 percent of other locations," Bremble says.

But its growing market is the real attraction. As shown by recent years' box-office revenues, Hollywood is largely relying on visual-effects-studded pictures, such as Avatar and The Avengers. To distribute visual effects production to different locations across the world is an instant way to cut costs.

But China grows as a popular location for the distributed visual effects work not only thanks to a lower labor price but also because of the domestic film market's huge potential.

As the fastest-growing film market, China produced 791 films in 2011. The box office has been rising by 30 percent a year since 2003, reaching a record 13 billion yuan ($2 billion) in 2011. It's widely believed it will become the second largest film market, after North America, by the end of 2012.

Pixomondo has a growing number of Chinese clients. The Chinese offices used to work mainly on Hollywood films but are dealing with three Chinese films' pre-productions - about half of the projects they will work on in China this year.

Base FX's cooperation with local filmmakers started from the time the company was set up. Bremble's confidence comes from people he has met here, both filmmakers and visual artists.

He believes China has many great filmmakers. In 2005, when he was an independent director, who brought his film to China, a Chinese visual effects team stayed with him to complete the work, even though the company could hardly sustain itself.

"I see our domestic efforts as an investment in the future," Bremble says. "We like to be part of China's rapid growth in the film business and technology. People will be surprised at how fast this industry grows."

The company has worked on one or two Chinese films a year from 2007-11. But by the first half of 2012, more than 70 percent of its projects are Chinese. Four to five big Chinese releases are being lined up for 2013.

But working with Chinese filmmakers can be challenging. And the challenges are not always technical.

Chinese filmmakers often begin working on the visual effects after filming is complete. They regard it as part of the post-production work, or a solution to missing locations or talent scheduling issues.

"In the beginning lots of potential clients came in and said, this is the movie, you have two months. Of course they expect the quality they see on our showreel, which is obviously not possible in the given time, so we have to reject these projects," Heinze says.

"If you come at an early phase, we can discuss and make it precisely clear what the visual effects will be like. That saves a lot of money - money that can be used to create great effects."

Bremble points out Chinese movies usually have just one or a few investors. So, they want quick returns and don't allow much time for post-production work.

In the United States or Europe, however, the visual effects team are involved from the very beginning, often at the scriptwriting stage.

But he has met some Chinese directors who know only that they want something "cool" but can't describe at all what that is.

A growing number of Chinese filmmakers have realized pre-production's importance, such as Zhang Yimou, who worked with Base FX on The Flowers of War and Lu Chuan on King's Feast.

Base FX is working on Hong Kong director Gordon Chan's costume drama The Four. Chan began discussions with Bremble before the script was completed. He was planning to build a small town, but Bremble showed him a CG city, which cost much less. Chan decided to go with it.

Visual effects budgets are another obstacle for Chinese films.

Kai, of Base FX, points out most Chinese films spend only about 10 percent of their budget on visual effects, while Hollywood films use 15-30 percent, and even more for such visually striking pictures as Avatar.

But Chinese filmmakers are starting to spend more on effects, Heinze says. "Some movies are already in the scale of what Hollywood would spend on an independent movie."

Both Pixomondo and Base FX believe China will need real creativity when its labor cost advantage disappears. But they're not concerned, they say, as they see more local talent developing.

When Bremble worked on Conan the Barbarian last year, the director only knew he wanted an underwater creature that's "dangerous" and "scary". Base FX's visual artists created four packages with different skin, lighting, wetness and color.

When Base FX worked on I am Number Four with George Lucas' Industrial Light & Magic, the visual effects industry's standard-setter, Base FX's Chinese artists set the look.

"Our Chinese employees are pretty young; they're 20-somethings," he says. "They may not be as experienced as their counterparts in Europe and the US, but we have so many big projects that they can develop fast."

Some of Base FX's employees have opened their own studios and are working with their former employer, Bremble says.

Coal mine blast kills 18 in Jilin